Reina is the main antagonist and the main enemy of Season 1 from the animated series. She is a "Neutral" (neither Angel nor Devil), and used to be an Angel in the past but after she had committed a sacrilege and was sent to the Limbo where she has been prisoner for centuries along with her slave, Maliki. Her mascot was the beetle Scarap, who had been turned into a brooch.

In the past, Reina was an angel she was 15 stars old when she committed a sacrilege that turned her into a Neutral and sent her to the Limbo for many centuries and years since her exile.

As a Neutral, Reina has got long cerulean, white, and dark blue hair, amber eyes, pale skin, dark primrose purple lips (but gray lips), and two tattoos above and under her eyes, one of them is black and the other is red and has black fingernails on her hands. After that, she has got an evil, cruel, arrogant, ruthless, dark, selfish, manipulating and revengeful personality. However she is also quite intelligent and her plans are always ellaborated, she thinks of every move before she acts.

As an Angel, Reina had long light blue hair and light yellow wings. After that, she had a sweet, caring and protective personality but also let her feelings speak over her mind very often, which later were the cause of her sacrilege.

She used to wear white and blue clothes. As a Neutral, she used to wear a white hood on and a white and black spider-like mask on her head until her sacrilege set her free after Raf and Sulfus kissed each other and the Golden School has been collapsed. She wears a white robe with dark gray, and non green stripes and markings and primrose on the inside out of her robe, and wears light and dark gray circular target-like designs on her knees, legs and feet with boots on, but eventually hold a long 6-foot black, teal and ancient walking stick and with a silver, plantinum ball that looks like the monster's claw. She wears a dark, light and cool gray jacketed-dress with a hood on and smoke coming out on her feet.

Reina's story begins in the end of 1800, she was an angel who was doing her first stage in the Golden School, Paris. Her rival devil was Zebel and the human assigned to them was Maliki, Raf's biological father.

Reina appeared to always win the challenge for her human worked for the good of humanity but after his wife, Angelie, misteriously disappeared Reina saw her human's heart become dark and selfish. After that Zebel started winning all of the challenges.

Reina had fallen in love with Maliki and was desperate with the fact that he would never start doing good actions ever again. Thinking that if she used one of his love potions on him, then he would fall in love with her and become good again.

She put a drop of a love potion in Maliki's wine, as soon as he drank it, he fainted. Reina run to him and woke him up however the potion didn't make the wanted effected, Maliki still didn't love her nor knew her. Zebel showed up saying that his seventh sense had told him that something was wrong with his human, understanding what Reina had done to their human he scolded the angel and told her that the love potions only work with someone who is already in love and Maliki had stopped loving when his wife went missing.

Still not wanting to give up in making Maliki hers forever, Reina transformed back into an eternal in front of Maliki, something that was forbidden, and flew towards the Golden School in order to grab Maliki's portrait. Zebel tried to stop her, telling her that way Maliki wouldn't just love her, he would become her slave forever and that it was a sacrilege but Reina didn't listen to him. After fighting against Zebel and getting rid of him, Reina flew towards the Portraits Room. One more time Zebel tried to stop her but she was far too determined to go back. She entered inside the Portraits Room and removed Maliki's portrait causing him to lose his free will and become her slave.

The sacrilege was so big that the wave of the sacrilege destroyed the whole Golden School. Reina was expelled from the angels, she tried to join the Devils however the sacrilege she committed had been a way too big even for a devil. The High and Low Spheres punished Reina and locked her in the Limbo with chains, a mask covering her face. Maliki became her slave and henchman forever.

She wants to take revenge on Angels and Devils because they have trapped her in the Limbo. In the past, she was an Angel, who fell in love with her Earthly one, Maliki. To make him love her, she stole his portrait in the Room of Portraits, subjecting it to her will. Because of this sacrilege, she was imprisoned in chains in the Limbo. She wants Raf and Sulfus to kiss, because a second sacrilege will set her free. She's defeated by the Angels and the Devils using Prism Fly.

Raf does not have Prism Fly but she used her Think Fly to speak to her teacher and her teacher said she should give out all the power in her. Reina was suprised at this move and couldn't defend herself. So after Raf had given out all her powers to defeat Reina, Raf slept for three days in the Golden School.

At the end of the 52nd and final episode, "The Universe Balance (Part 2)" from Season 2 of the animated series, after Blue has got the key to the gates of Limbo, Reina finally welcomes her, happily and evilly into the Limbo and takes her hood off to see the face of her enemies.

Reina is not found in the original Italian comics. She was created for the animated series.

Reina as an Angel with her pet Scarap

Reina as an Angel

Reina after being released from limbo 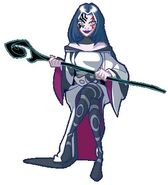 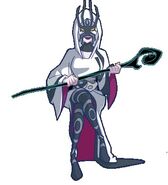 Add a photo to this gallery
Retrieved from "https://angelsfriends.fandom.com/wiki/Reina?oldid=4710"
Community content is available under CC-BY-SA unless otherwise noted.