Kabale (Kabalè in Italian) is a supporting character of the Devil's group in the series Angel's Friends. She is a 99% Devil, who has come to earth in order to complete the final stage to become a 100% Devil. She is also Sulfus' and Cabiria's friend.

Sulfus's best friend and right arm, she's always smiling and, because of this, looks a bit crazy. She loves challenges and gambling. During the stage her Earthly one is Edward and her rival is Sweet. She's in love with Sulfus, thereby making her the least approving of the love-hate relationship between him and Raf.

Her mascotte is Nosferatu, a bat resting on her bracelet with studs.

In movie Angel's Friends movie The Sunny College , she shows true love interest at Sulfus . Who still loves Raf and is interested in her. Kabale talks with Sulfus alone after he got Nightmare , later thinks of plans to ruin his love to Raf. But as seen at the end of Season 2 she accepts his love for Raf and doesn't want to make Sulfus unhappy. Yet we see how Kabale cares for him.

She has a punk and flashy look, she usually wears miniskirts, adherent dresses and boots, mainly in pink, grey and black. She has short dark red hair and amber eyes.

Kabale is younger, at 10 flashes (years), and she has blond hair with fiery-red tips. She likes films, cartoons and comics and she's director and illustrator. She plays the electric guitar is the Devil's rock band.

Kabale (upper left) as she appears in the original comics 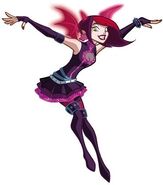 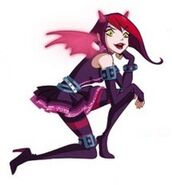 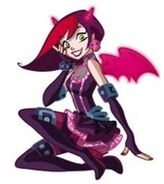 Add a photo to this gallery
Retrieved from "https://angelsfriends.fandom.com/wiki/Kabale?oldid=4730"
Community content is available under CC-BY-SA unless otherwise noted.